I'd missed/forgotten that the Globes give awards for directors and screenplay (didn't think these folks were big enough stars for the HFPA to bother), but seeing as they did I figured I'd go back and make comparisons.

I stopped with the screenplay award pretty quickly, as the mix of awards that offer one award versus two awards (one each for original and adapted) was going to make things pretty messy.

For directors, I used the usual awards (Globes, LA and NYC critics, National Review Board, Satellite) plus the DGA Awards. Not surprisingly, the latter are the most predictive; they've only differed from the Oscar six times in their history, with three of them happening since 1990 (the oddest was Ron Howard winning the DGA in 1995 for Apollo 13 while not even getting nominated for the Oscar). The Globes are a little less accurate, with they missing a bit more since 2000 than in the 1990s.

In any event, David Fincher should still feel pretty good about his chances, as he's won all of the directing awards given to date (sharing the LA critics award). If the DGA splits off and goes with someone else, he may want to worry.

So I was participating in a live blogging of the Golden Globes (while not actually watching the awards, which was less of a problem than you might think), and someone posted that The Social Network was now the movie to beat for the Best Picture Oscar now that it had won the Golden Globe for best drama. Which got me to thinking: is that actually true? Time to compare the winners!

I went back and got the Oscar and Globe winners since 1990. I stuck with drama winners only for the Globes, though they do give an award for the best comedy/drama as well. And, just for comparison's sake, I got the award info for the LA and NYC critics awards, the National Review Board's awards, and the Satellite Awards (offered by the International Press Agency).

And looking at all of the results, the Golden Globes are a great predictor for the Best Picture Oscar... as long as your film was nominated before 2004. From 1990 to 2003 the Globes only missed three times (if you include the two Oscar winners that picked up the comedy/musical Globe, Shakespeare in Love and Chicago). From 2004 on, though, the Globes have only gotten it right with Slumdog Millionaire.

Picking up where they left off, though, are the Satellite Awards, which have a four year streak going. Less impressive is that the only time they matched the Oscars prior to 2006 was when Titanic won, which was pretty much a given (undeserved as it was). The other awards were less predictive, with none of the three offering much insight as to a potential Oscar winner.

The good news for The Social Network out of all of this? It's swept all of the awards I checked. Since 1990 this has only happened to one other movie: Schindler's List. That worked out pretty well for Spielberg and company. Usually a move that wins three of the five awards gets the Oscar, but there have been notable exceptions (Brokeback Mountain, L.A. Confidential, Saving Private Ryan).

So the answer to my question is that the Golden Globes, at least of late, hasn't made it's best drama winner the film to beat at the Oscars. But The Social Network may still be the film to beat given its overall performance in awards.

If I had to extrapolate based on the awards given to date, I think Colin Firth is in the best position to win an Oscar, having won awards from all groups except the National Review Board. Christian Bale and Melissa Leo would be next best off, having won three of five awards. None of the best actress awards have repeated.

So if I had to come up with a rule, I'd say winning the Golden Globe or the SAG Award is a good sign that you might win the Oscar. Better to win them both.

(Note: I make no claims that these finding are based on anything like actual statistical research. I pretty much eyeballed the results and went on that. This isn't the Freakonomics blog.)

I'm not sure why someone who gets all Nietzschean about being above the law would settle for rolling people on the Metro. Why set the bar so low? Entertaining for reasons Kirsti got into, and a good point of entry into the work of Robert Bresson, which I'd heard was stylized & difficult (this was not, particularly). 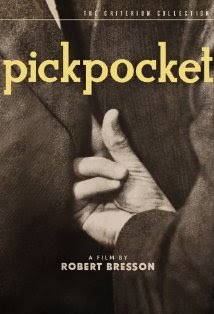 An existentially depressed man becomes a pickpocket, has a difficult relationship with his mother, gets trained by pickpockets who are more skilled than he is, and remains existentially depressed. Also, there are a girl, a best friend, and a detective.
I've never liked movies where each character says exactly what he or she is thinking, so I enjoyed this movie. In a couple of scenes the actors and directors let pauses, glances, and facial expressions do the work that dialogue normally would. And the action sequences have no dialogue and almost no sound, which in a weird way makes them more exciting.
This movie has many similarities to Crime and Punishment, but without all that bludgeoning. Maybe they should have called it Petty Crime and Punishment.

Joan Rivers: A Piece of Work
Neither of us are big Joan Rivers fans, but we caught half of her Fresh Air interview and it piqued our interest. We catch Rivers in 2009, still trying to constantly tour, playing smaller rooms, and still apparently feeling like she's paying for accepting a late-night talk show on Fox: a decision made 24 years ago which upset a man who's been dead for five years.

It's not the greatest or most illuminating life-of-the-entertainer doc, but there's enough there. She writes all her own material, is old-school enough to keep it on thousands of index cards, and writes her own cue cards (but cannot spell vagina). I was surprised to hear she considers herself an actress first, when most of her "plays" have her playing herself.

Oddly, no mention of Rabbit Test.
Read the full post with comments

Here's all anyone really remembers about The Green Hornet: Bruce Lee as Kato. Who played the title character on the TV show? You don't remember. You looked it up on Wikipedia just now, like I did. I only saw an episode for the first time about a year ago. It hasn't aged well. Aside from Lee and the killer theme song, it was boring as hell.

Despite very separate origins, The Green Hornet and Batman are now forever linked because of their television incarnations, which shared a network, production company, sets, and a narrator. Batman of course was famously campy, while GH played it straight. So now that Frank Miller and others have turned Batman into a crabby psychopath, it only makes sense that The Green Hornet takes a lighter touch.

Rogen's Britt Reid is a slacker billionheir to a newspaper fortune. When his dad dies, Britt meets the old man's mechanic/barista, Kato (Jay Chou), they start hanging out and become costumed vigilantes. People are skeptical, as I was, about Seth Rogen in an action movie, but Rogen & Evan Goldberg apply much of the same sort of comedy + buddy + action-violence formula that worked (at least for me) in Pineapple Express. Less blood this time, but more explosions and kung-fu. I was able to suspend enough disbelief for all this. Once you get around the idea of a powerful newspaper in 2011, other things are easy to roll with.

Michel Gondry has some nice moments here. There's an especially cool montage of gossip spreading through the LA underworld that's reminiscent of his music videos. It's a pity the film was converted to 3D. I'd think a director like Gondry would do interesting things with the medium if allowed to shoot in 3D; why not give him the toybox?

*it was Van Williams. You did not know. Liar!

8: the Mormon Proposition
A long argument for revoking tax-exempt status for religious groups, this is 3/4 a look at how the LDS Church funneled tons of cash into front groups and commanded members to campaign and contribute in support of California's Prop 8. The other quarter is how the church treats its LGBT members. Sadly not going to change any minds -- Mormons will either not see it or dismiss it as a biased attack. Mormon-hating fundies will continue to hold their noses at their coalition with them, for their perverse "greater good."


My Name Is Bruce
A fanboy calls on Bruce Campbell (as himself) to use his extensive cinematic knowledge of how to get rid of nasty demons to rid a small town of a nasty demon. A few laughs, but looked much better on paper.

Exit Through the Gift Shop
"Street Artist" Banksy cobbles years of footage of himself, Shepard Fairey, and other graffiti/stencil artists doing their thing, all meticulously documented by a compulsive videographer named Thierry Guetta. In the course of making the film (more accurately, in the course of wrenching Guetta's footage away from him and turning it into something usable), Banksy convinces Guetta to go do some street art of his own. He adopts the persona "Mr. Brainwash" and does a little street-stencil work before hiring a stable of designers and artists to churn out a ton of derivative pop art, displaying it all in a huge, wildly successful 2008 art exhibition.

Or does he? Long before Exit Through the Gift Shop was released, rumors were circulating that Mr. Brainwash was a hoax put on by Fairey and/or Banksy. Guetta is quite the character. Artistically he's akin to Mark Borchardt and Tommy Wiseau, but does appear, at least, to be very good at turning trash into cash -- he's first shown putting hundred-dollar tags on "vintage" clothes at his trendy LA boutique. He's maybe a little too good at this to be real; as the years of videography go on, and then as his (seemingly very expensive) art show comes together, I thought at least once, "where's this money coming from again?"


If Mr. Brainwash is indeed a hoax, does that make EThGS a mockumentary? I don't think so, It's still about creating subversive art, and it's quite possible that Banksy has documented a creation of a human installation.