What Messed Us Up, Part II: Return of the Messening 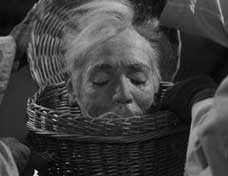 When I was little, I watched an afternoon showing of The Four Skulls of Jonathan Drake. My mother told me it was too scary for me, but I told her not to be silly. I had nightmares for a month.

I watched it as an adult and couldn't believe how boring it was. Here's the beginning of an online plot synopsis: "Jonathan Drake, while attending his brother's funeral, is shocked to find the head of the deceased is missing." Didn't I read a letter about that in "Dear Abby" last week?
Read the full post with comments

What Messed Us Up...

Welcome to What Messed Us Up, an ongoing look into...just that.

The Facets Halloween series led me to check YouTube for two film-related things that really scarred me as a kid.

This first one is a TV trailer for a 1977 horror film called Suspiria. I saw this late at night while watching Saturday Night Live. I seem to remember my sister, who would have been 3 at the time, covering her eyes the second this hit the screen -- she'd apparently seen this already. Now the scariest thing about it is the awful singing:

The second one is this trailer, which I saw in the theater. I was about 10 or 11; and my friend Jeremy and I went down to the Uptown with his mom when it was still repertory to see the Bakshi Lord of the Rings movie. We weren't really prepared for this, but of course it became our must-see film of the following year:

Labels: trailers, what messed me up

The folks at Facets -- a film resource I don't use nearly enough, yet is one of the things which would make it difficult for me to leave this area -- are posting 31 days of horror clips in October on their blog. Some good stuff so far; check 'em out.
Read the full post with comments

Finally got around to seeing The Bourne Ultimatum Friday night, with passes donated by a co-worker of the wife. We'd seen the previous two, and liked them on that sliding scale you use for summer blockbusters.

The biggest problem I have with the series is that none of the action is particularly memorable. It took me quite a while to remember some fairly important details, such as how the last movie ended and what happened to the woman from the first film. Thankfully, this was anticipated and enough exposition was given to get me back to speed. Still, it's disconcerting that I remembered so little from the previous movies.

The camera work was also way too jumpy, which I know is the style (or was the style and only still is in movies like this), but I felt like I was missing detail due to the blurriness. The action on its own would have been more than enough to give the movie an energetic feel.

So all in all, it's a solid B- and a good capper to a trilogy I'll probably never concern myself with again except when I flip past it when it's being shown on USA or something.

There were four previews:

American Gangster - Denzel Washington plays a New York City drug lord, Russell Crowe plays the cop looking to take him down. Ridley Scott directs. This looks like the best film of the four previewed, but it may say more about the other movies. Still, I'd like to see this.

Beowulf - we saw a poster for this on the way into the theater, and the wife was concered with Angelina Jolie's presence. From the trailer this looks to be the least of its problems. It looks like the folks behind this (writers Neil Gaiman and Roger Avary and director Robert Zemeckis) are trying to give this a Lord of the Rigns/Chronicles of Narnia sort of vibe. All I know is the trailer opened with Jolie as a watery tart involved in some sort of farcical aquatic ceremony. I can only hope Anthony Hopkins can find a shrubbery.

Rendition - Reese Witherspoon plays a woman whose Middle Eastern-ish husband is grabbed by the CIA and taken to an interrogation facility outside of the US. Jake Gyllenhall is assigned to his case, and begins to doubt his mission based on the techniques used to try to extract information. Meryl Streep and Alan Arkin play CIA types. I don't buy any of them in their roles, though Reese's shrieking did make her seem particularly aggrieved.

Lions for Lambs - I'm assuming this is Robert Redford's statement on the current war, as he plays a professor who has two students leave school to join the Army. The wind up in Afghanistan and in some peril. Meanwhile, in DC, a senator played by Tom Cruise has a plan to change the war, and wants to use a journalist played by Meryl Streep to get his message out. I have no idea how these connect, and the trailer gives no indication. I can't help but think a movie with a preachy Redford and any Cruise is one that I don't want to see.
Read the full post with comments